The Sanctuary of Divine Mercy in Poland encompasses the :

- Chapel of the miraculous image of the Merciful Jesus and the tomb of St. Faustina.

While in Poland, I also spent a day at the Auschwitz - Birkenhau Memorial. It was an experience that was very profound.

The entire trip was a truly enriching experience!

At the heart of the Shrine of The Divine Mercy in Kraków-Łagiewniki stands this chapel where the miraculous image of Merciful Jesus and the tomb of St. Faustina are to be found.

This chapel has since witnessed the prayer of the Apostle of The Divine Mercy and the extraordinary graces (including the revelations of Jesus and the Blessed Mother) received by St,Faustina in this place. With her death, the message of God’s Mercy, which by the will of Christ she gave to the Church and the world, was deposited in this place. For this reason the Łagiewniki Shrine became the centre of devotion to The Divine Mercy, the place from which this message is spread throughout the world and the place to which people from every continent come on pilgrimage. They come asking for many graces, to which the votive offerings in the display cases around the chapel bear witness.

The miraculous image of Merciful Jesus painted by Adolf Hyła is placed above the side altar on the left side of the chapel. It was blessed by Father Józef Andrasz SJ (Sister Faustina’s spiritual director) on 16 April 1944, on the first Sunday after Easter. Copies and reproductions of the image have spread throughout the world, thereby fulfilling the words of Jesus spoken to Sister Faustina at the first of His revelations: I desire that this image be venerated, first in your chapel, and [then] throughout the world (Diary 47).

A white marble coffin with the relics of St. Sister Faustina rests on the altar below this image, and one relic has been placed in a marble prie-dieu before the altar, for the convenience of pilgrims wishing to venerate her and ask for her powerful intercession through prayers to The Divine Mercy.

The small original church inside the convent contains Faustyna’s relics and the site receives over 2 million pilgrims a year.

Report of a miracle:

In March 1981, while praying at the tomb of St. Faustina at the church, Maureen Digan of Massachusetts reported a healing. Digan had suffered from lymphedema for decades, and had undergone 10 operations, including a leg amputation. Digan reported that while praying at Faustina's tomb she heard a voice saying "ask for my help and I will help you" and her constant pain stopped.

Upon her return to the US, five Boston area physicians stated that she was healed (with no explanation). Digan's healing was declared miraculous by the Vatican in 1992, and paved the way for the beatification of Faustina Kowalska. 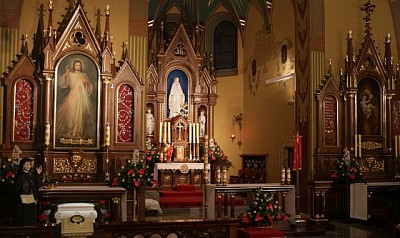 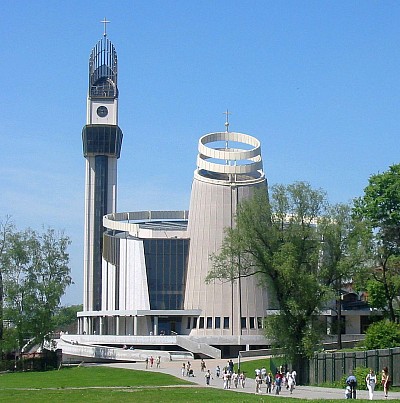 The building was designed to resemble a boat, and has a 77-meter high observation tower that resembles a mast.

The basilica can accommodate about 5,000 people and the main chapel has about 1,800 seats. 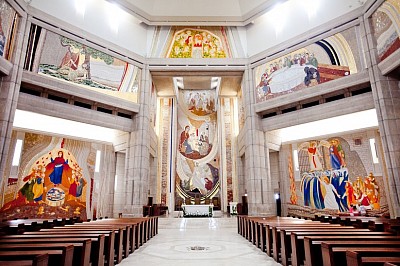 Have No Fear! John Paul II Center in Krakow is destined to be the main shrine to the saintly Pope who led the Catholic Church into its third millenium and made an indelible mark on the world. The vast complex has been designed to accommodate a number of Catholic institutions, such as a Volunteerism Center and the Institute of John Paul II, as well as churches and chapels. The center is conveniently situated in close proximity to the famous Sanctuary of Divine Mercy.

The centerpiece of the shrine is a rather simple marble altar in the middle that contains a phial with the relic of the blood of Saint John Paul II displayed in a glass case. 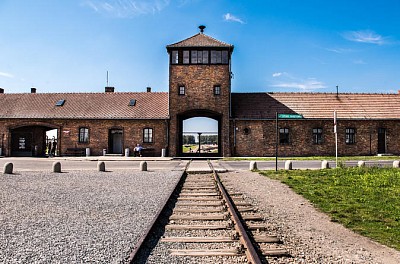 In 1940 the German occupiers established a concentration camp for Polish political prisoners, members of the resistance and intelligence in the town of Oświęcim (Ger. Auschwitz). In time it was expanded, and from 1942 it also served as a death camp for Polish and European Jews. In view of this latter function, in the second part of the camp, called Birkenau, four huge gas chambers were built, in which victims were killed using a gas called Zyklon B. More than a million people lost their lives in Auschwitz, most of them Jews, but also tens of thousands of Poles, Sinti, Roma, and Soviet prisoners of war. After the war, the camp of Auschwitz-Birkenau became a symbol of the Holocaust.

St Maksymilian Kolbe was murdered in the starvation cell of Block No. 11 in the original camp of Auschwitz, and Sister Teresa Benedicta of the Cross (Edith Stein) perished in the gas chamber in Birkenau. Nowadays, the site of the former camp is a cemetery, site of memory and museum. It is also a place for profound theological and moral reflection and a place of dialogue. The Auschwitz-Birkenau Museum was visited by both John Paul II and Benedict XVI.