Note: By double clicking on the photos you can see a larger image.

The place of Our Lady's first apparitions on the hill of Crnica is usually called Apparition Hill. It is situated several hundred meters above the Bijakovo hamlet of Podbrdo. A steep footpath leads from the houses to the very place of the apparitions. Now slightly widened by the millions of pilgrims who have so far visited the place of the first apparitions, the path has become visible from as far away as St. James. Numerous pilgrims, many of whom were born and raised on flat asphalt, often in unsuitable clothing or even barefoot, and on their knees, climbed over the sharp stones to the place of Our Lady's first apparitions. Half way up the path is located a large plain wooden cross. This is where on the third day of the apparitions, June 26, 1981, Our Lady appeared to the visionary Marija Pavlovic who, after having had a vision with the others at the usual place that evening, ran down the hill a little ahead of the other visionaries. At this place Marija once more saw Our Lady, now with a sad face. Behind her was a large cross and motioning with her hands she said, "Peace, peace, peace and only peace! Peace must reign between God and man and also between men!" Today this is a place where pilgrims stop, remaining in prayer and reflection on the message given by Our Lady, directed to man, and the world of today, which is so much in such great need of peace. The very site of apparitions is a large bare space on the rocky ground more than a hundred meters in diameter, completely trodden down by the feet of millions of pilgrims, without a single stem or blade of grass between the rocks, without hardly a lump of ground or even little rocks. At the site which the visionaries closely marked as the very place where Our Lady had appeared to them, a high cross is erected, planted into a pile of rocks. Only something truly extraordinary could have attracted such a great multitude of people to that place. At any time of day or night, any day of the year, individuals and groups can be found in prayer, in song, in deep meditation, and silence. 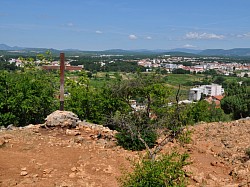 View of Medjugorea from Apparition Hill 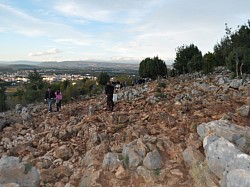 The path up Apparition Hill 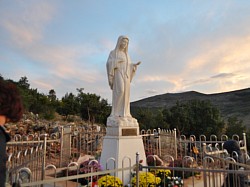 At the top of Apparition Hill ... site of the Apparition

About one kilometer from the church of Medjugorje, Cross Mountain rises up as a continuation of Crnica Hill, forming an angle with it. On its peak (520 meters above sea level) the pastor and people of Medjugorje at that time erected an 8.56 meter high reinforced concrete cross in commemoration of the 1900th anniversary of the Passion of Jesus. In it they engraved the words, "To Jesus Christ, Redeemer of the human race, as a sign of their faith, love and hope, the pastor Bernadine Smoljan and the parish of Medjugorje erected this cross. From every evil deliver us, O Jesus." Relics received from Rome for the occasion are embedded in the cross bar itself. They include a piece of the cross, venerated by Christians as the one on which Jesus Christ was crucified, the largest part of which is preserved in the Church of the Holy Cross of Jerusalem in Rome. The cross was completed on March 15, 1934. Later on the custom was established of celebrating Holy Mass at the base of the cross on the first Sunday after Our Lady's birthday in commemoration of the Exaltation of the Holy Cross. The Cross Mountain does not so much attract pilgrims for its natural beauty or because of the importance of the cross erected on it, but only because, after the Medjugorje apparitions began, a great number of people claim that they saw various luminous and other "signs" on that cross. Everyone connected them with the apparitions of Our Lady themselves, with the message of the Medjugorje apparitions - peace between God and man and between men. They understood that the way to that peace leads unavoidably through the cross. They included the veneration of the cross in their pilgrimage devotions and practices. Climbing up that difficult, near impossible path to the Cross on the mountain, pilgrims pray the devotion of the Way of the Cross. That is why, along the path on Cross Mountain, fifteen bronze reliefs are placed and the image of Our Lady is in each one of them. Our Lady accompanies both Jesus and us on the way of the cross in our life. 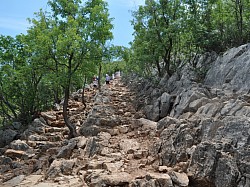 The climb up to Cross Mountain 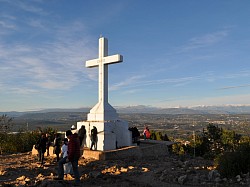 At the summit of Cross Mountain 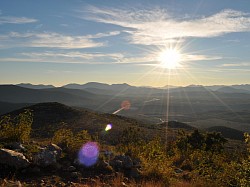 View from the top of Cross Mountain 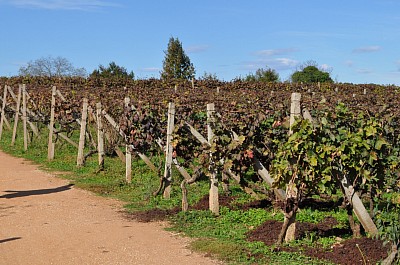 Walking to the sites in Medjugorje, which brings us through the vineyards where millions of feet from pilgrims around the world have passed before ours. Rich and poor, families and religious, kings and servants, Catholics, Protestants, Jews, Muslims, atheists…all pilgrims, all seeking truth, all seeking God. If the dirt paths that weave through fields between St. James Church and Apparition Mountain have not been sanctified by an actual apparition of Our Lady, they certainly have been sanctified by the millions of prayers that have been lifted up to Heaven at every hour of the day and night, over the past quarter of a century and longer by pilgrims from all over the world.

Walking allows meditation and prayer and can make a world of difference in your pilgrimage. By the charter of Her messages, it is certain Our Lady wants these paths walked in the symbol of the Trinity She established by appearing on Apparition Mountain. From Apparition Mountain, to Cross Mountain, to St. James Church and back to Apparition Mountain again, a triangle is formed and the holiest way to get to these sites is by way of the trails. 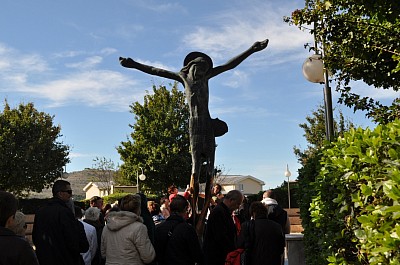 The 'miraculous' Risen Christ Statue behind the St.James Church

The Medjugorje expansion project was the idea of the late Father Slavo (March 11, 1946 - Nov. 24, 2000.) Made mostly of bronze and copper the statue is quite unique and beautiful. Most pilgrims would stop by the statue to admire it and pray when people begin to notice that the statue was oozing an oil or water like substance.

With liquid dripping from one knee, the bronze sculpture of the Risen Christ has been a mystery in Medjugorje since 2001. While the nature of the liquid is itself mysterious, the mystery as such has just increased, for these days the unknown substance flows from both legs of the sculpture.

Almost 11 years after one of the knees of the Risen Christ sculpture in Medjugorje first started to shed a tear-like liquid, even returning pilgrims are surprised by the sculpture these days: Now the watery substance comes from both legs.

The sculpture has shown to be unpredictable on previous occasions as well. Several times, the dripping has stopped for extended periods of time. One such occasion in 2010 coincided with Medjugorje receiving large amounts of rain, weakening a theory that the watery substance could be rain dripping out from inside the sculpture. Perhaps it was to prove the skeptics wrong!

On another occasion, a large group of pilgrims witnessed how the substance was suddenly red and no longer clear. A minimum of 50 people witnessed this.

Vatican experts have been rumored to have analyzed the substance, but neither Rome nor the parish of Medjugorje have ever confirmed such analysis to have taken place.
The statue is a replica of the 277 centimeter silver sculpture “The Resurrection”, sculpted by Andrej Ajdic and presented to Pope John Paul II on the occasion of his 1996 visit to Slovenia

Conclusion: I personally can attest to this unexplainable "occurence",  as I have witnessed it myself, mltiple times! (Neville Carvalho)

I had the opportunity to meet Patrick during my second visit to Medjugorea. It was truly inspiring to hear his story of conversion.

Patrick had a powerful conversion from his very materialistic lifestyle.  He began his testimonial by telling us that he had been a  very successful businessman in western Canada.  He had been raised Catholic and attended Catholic schools. He hated school, quit when he was only 16 years old, and took a job at a car dealership washing cars. He was so personable with the customers on the dealership lot that in ten years he owned the company.  After a while, Patrick's impressive salesmanship helped him acquire additional car dealerships.  He was one of the most successful  businessmen in western Canada.  However, his spiritual life was a void.  He lost interest in the Catholic faith, the Catholic church, and God when he left school.  The almighty dollar was his god and he made sure that his children knew this.  Whenever a problem would arise, Patrick used his wealth to fix it.  On weekends he would fly himself and his employees to Las Vegas, all expenses paid. Patrick credited his mother's prayers for him for many, many years and a book about Mary's messages from Medjugorje that his wife, Nancy, a Croatian, had given him to read, as the turning point in his spiritual life.  When he opened up the book he searched for the shortest sentence he could find.  It read, "I call you to conversion for the last time."  Then something incredible happened.  He felt that the message was directed to him and he began to cry uncontrollably.  It was this epiphany that caused him to sell all his car dealerships and move with Nancy to Medjugorje to begin a spiritual transformation. 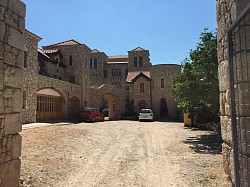 The Castle of Patrick Latta in Medjugorea 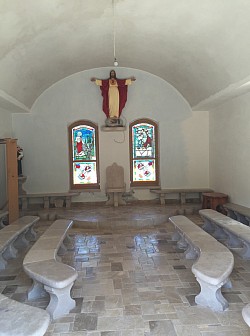 One of the Chapels inside the Castle 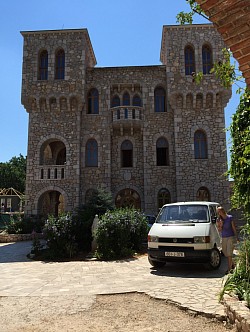