"Healing" from Pituitary Adenoma and Acromegaly 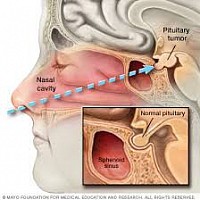 At Neville's request, I decided to share my story out of gratitude to God so that it may bring hope and faith because I had reached a point where I had given up hope of ever being free from the ever constant debilitating acute headaches I suffered almost 17 years. It affected me in so many ways and those around me.

I would say from around 15 years of age I first began having regular headaches but just like normal headaches many people have. However, around 27 years old the headaches progressively worsened and regular pain relievers began becoming ineffective. Approximately around the year 2002 the headaches became unbearable. I saw multiple family physicians and they in turn referred me to multiple Neurologists and even an Orthodontist. Every medical test was inconclusive. Every possible prescribed pain medication was tried such as Maxalt, Codeine, Tramadol and even Morphine but the relief was minimal and short term. I was treated for many years on the assumption I had 'unusual' migraines! When the symptoms no longer corresponded to even the worst migraine possible I was subsequently referred to an Orthodontist as it was now a suspected case of Temporomandibular Joint Dysfunction (TMJ).

2012:  After couple of months being treated by the Orthodontist with no improvement he decided to have an MRI of the jaw and facial area done. The x-rays were inconclusive but the MRI showed a possible partial image of what could be a tumour! I was then referred to an Endocrinologist and a NeuroSurgeon. Tests done by the Endocrinologist confirmed conclusively that the tumour did compromise the pituitary gland function causing a condition called Acromegaly. Acromegaly has NO cure only treatment to minimize symptoms.The average time it takes to be able to diagnose this condition is 15 years because it's  symptoms mimics migraines. It took approximately 17 years in my case, to be conclusively diagnosed. The Endocrinologist advised that for life long I would have to be on a monthly injection called Sandostatin. The cost of each injection was $1,600. I was started on it right away. Meanwhile I was also awaiting to see the NeuroSurgeon. I had a choice of 3 NeuroSurgeons that I could go to. Neville talked to a Respirologist at his work and she said of the three Surgeons there was one that had many years experience but for whatever, reason something 'within' convinced Neville to go with the youngest Surgeon with the lesser experience! After we met him for the assessment, instantaneously we both 'felt' he was our best chance! As you read this story it will become apparent that after all, strangely that 'feeling within' was actually more than just a 'feeling' ... today this surgeon is now the Head of Neurosurgeons at his hospital! God works in ways beyond our understanding.

Further MRI's were done showing multiple tumours in the pituitary gland, located at the base of the brain. It is called a pituitary adenoma. Due to the many years it had gone undetected it was now large enough to be classified as a Macro-adenoma rather than a Microadenoma.

Macroadenomas are tumors 1 cm across or larger. Macroadenomas can affect a person’s health in 2 ways. First, they can cause symptoms if they make too much of a certain hormone. Second, they can cause symptoms by pressing on normal parts of the pituitary or on nearby nerves, such as the optic nerves. In my particular case both of the above applied.

The NeuroSurgeon explained that given the proximity of the tumour to the brain the immediate concern was that the pressure on the optic nerve by the tumour it had begun to affect vision. Therefore, the surgery was needed to be done urgently. He explained that the surgery would NOT get rid of the headaches but at best there was a 50 percent chance of some pain reduction but that the main purpose of the surgery was due to the current risk of losing vision due to pressure on the optic nerve. Needless to say it was a very 'high risk' surgery given the tumour location but it was not an option as I was already in a critical situation!

There was a disagreement between the NeuroSurgeon and Endocrinologist as to which route to go with - 'high risk' surgery or keep on the monthly $1,600 Sandostatin injection? Ultimately I had to make the decision. We prayed over it and began to be convinced 'within' to go with the surgery.

A week later I had the surgery and apparently during the surgery multiple tumours were seen that had not shown up on the MRI's. The Surgeon somehow was able to remove all and with no residual tumour left at the base of the brain.

I have no doubt that the Surgeons hands were guided by God! The surgery itself was completed in LESS time than was anticipated for this type of surgery.

During the time the surgery was being done from the time it started to the time it ended Neville was in prayer constantly before the image of Divine Mercy  'envisioning' Christ Himself working on my surgery rather than the hands of the Surgeon. While still in deep prayer Neville suddenly became aware of the Surgeons hands on his shoulder saying " I cannot believe how well and quickly the surgery went and I believe I was able to remove safely ALL of the tumours without any damage'.

Three days later and to this day today February 25 2016 I have not taken a single pain medication for headaches or migraines! All praise and glory to God. All prayers were answered beyond expectations. No doubt a true MIRACLE!

I was also told that for the rest of my life, even after surgery I would still have to be on the monthly $1,600 Sandostatin injection because the tumour had compromised the pituitary gland and Acromegaly has NO cure but God granted beyond medical expectations ... tests showed the impossible - I did NOT NEED the injections anymore! The pituitary gland resumed normal function! Praise and glory to God!

God Bless you all.

I can personally attest to the entire contents  of this incredible 'testimony'! An undeniable 'miracle healing'!
During the surgery I literally 'envisioned' Our Lord's very hands guiding directly the hands of the Surgeon. The results defy even the most 'hard core' pessimist.
Psalm: 30:2
LORD my God, I called to you for help, and you healed me.
The 'power of prayer' ... !! All you NEED is faith.
Made with SimDif
Neville Carvalho - February 9th 2016